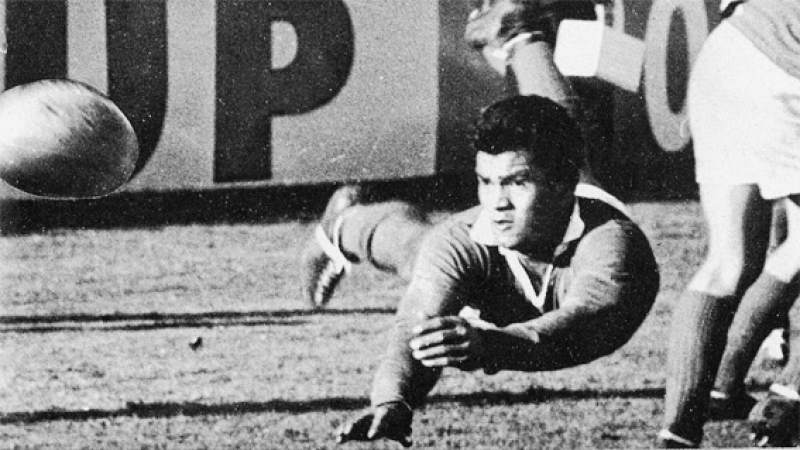 In the home, at work and on the rugby field, he was a perfectionist who demanded high standards of himself and those he looked after, relatives say.

Sonny Huru Rutene died at home at Patutahi this month, surrounded by family. He was 84.

Known to the wider community for his rugby career, the pinnacle of which was a place in the Maori All Blacks, Sonny was known by his family as a hard worker who would turn his hand to almost anything.

He and his wife Desiree raised 10 children, and cared for many others who came and went over the years.

Their children — most now grandparents themselves — recall that while they as a family were not well off, they wanted for nothing. Desiree made their clothes, buying material in bulk and making outfits in different sizes from the same cloth. She walked long distances to gather “fat hen”, a weed that — if picked at the right time — could be cooked as a nourishing vegetable. Sonny’s mother taught her that. Curly tops, the curly piece at the end of a squash or pumpkin runner, were another favourite.

Sonny was a “strict dad, hard but fair”, his children said. “He was big on manners, showing respect.”

Daughter Cheryl Te Rito said the family didn’t have much, and Sonny and Desiree took on “heaps of jobs” to provide for them.

“We always had our friends over to stay,” she said.

“As poor as we were, Mum and Dad never turned any of our friends away.”

And at night, Sonny could often be found in his garage, fixing old cars.

As a rugby player, Sonny was a utility back, says younger brother Willie.

“Most of the time he played halfback or first five-eighth,” he said.

Starr Rutene, Sonny’s junior by eight years (he died two years ago), could also play in either position.

“If Sonny couldn’t get to the game, Starr would fill in for him, and vice versa.”

But Sonny already had considerable senior experience by the time Starr came on the scene. At Te Karaka District High, Sonny played for the first 15 as a third-former, and when he left school at 15 he went straight into the Puha senior team that played in the Waikohu sub-union competition. Waipaoa Station had its own team — shearers and scrubcutters from Tuhoe settlements such as Waimana and Ruatoki.

Whatatutu, Matawai, Motu and Te Karaka were also in the competition.

Old Boys were the only Gisborne-based club team Sonny played for, in 1958. In the Waikohu area he played for Puha, Te Karaka and Rangatira.

He was the third player from the Poverty Bay union — after Richard White and Allan Rowlands — and the first from any of its sub-unions to make 100 first-class appearances. His first was for Poverty Bay against the Barbarians at the official opening of Rugby Park in 1955.

Sonny played 116 first-class games. He represented Poverty Bay in 90 games from 1955 to 1968, scoring 11 tries, six conversions, seven penalties and six drop goals. He also represented Poverty Bay-East Coast in 1959 and 1966, and the Maori All Blacks in 1959 and 1960. He played against the British Lions three times — for PBEC and the Maori All Blacks in 1959, and for PBEC in 1966; his cover defence and tactical kicking were praised in press reports, and Sonny considered the PBEC match against the ’59 Lions as one of his best games.

Willie Rutene said he often heard it said that if Mac Herewini (All Black first-five from 1962 to ’67 and Maori All Black from 1960 to ’71) had played at a different time, Sonny would have been an All Black.

He did, though, have the distinction of playing in the same Te Karaka senior team as eldest son Wayne, in 1974.

“Dad was first-five, I was second,” Wayne said.

“I had my uncles there, too — Willie and Starr, and Dick Grace — and my cousin Jack Peneha.”

Wayne played for Poverty Bay juniors as a first-five before moving to Wellington and playing rugby league for Waterside and Miramar. He was picked up by English club Widnes, where he stayed for two years and was in the squad that beat the 1980 touring Kiwis 14-7. He moved to nearby Swinton for two more years of English league. When Wayne returned to New Zealand, the Wellington Marist league coach met him at Auckland International Airport to sign him before Waterside had a chance to swoop.

Another son, Robin, was also a good rugby player, representing Poverty Bay before moving to Hawke’s Bay and then Wellington, where he, too, played league.

Sonny Rutene had a repertoire of signals to give his team an edge.

“I played on the wing, and if he wanted to kick for the corner he would tap his head,” Willie said.

“And if he bent down to tie his bootlaces while a scrum was being set, we knew a grubber kick was coming.

“His strengths were his sidestep and his reading of the play. He used to say to Starr, ‘All I need is the ball’. He was thinking all the time.”

Sonny regarded the Barry Cup games for Waikohu against Matakaoa as the most memorable matches for Rutene brothers playing together. The cup was “the Ranfurly Shield of the East Coast”, and those two sub-unions dominated.

Sonny was born in Gisborne on August 3, 1934, the third child and eldest son of 15 children of Te Hira (Doey) Rutene and Pani Peepi (Mabel) Rutene (nee Tait). His tribal affiliations were Te Aitanga a Mahaki and Te Whanau a Apanui.

Sonny left school at 15 and went bridge-building with Bill Ireland for about 10 years, working throughout the district and up the East Coast. On his return from the 1960 Maori All Black tour to Tonga and Western Samoa, he found work as a driver at a sawmill in the King Country, where in the afternoon work gave way to hunting and then, in the evening, fishing. He was back in Te Karaka in 1961. He had two spells with Waikohu County Council, operating machinery and earthmoving equipment for about 10 years in the first, and driving a grader in the second. For about five years Sonny worked in the telephone exchange at Te Karaka, connecting callers until the exchange closed, and for 15 years he drove a freight truck for MacDonald’s Transport.

A spell working at the Rangatira Tavern in Te Karaka started Sonny on a late-blooming career as a publican. He managed the Tolaga Bay Inn and Waerenga a Hika Tavern before joining younger brother Willie at the Tatapouri Tavern. Even then, Sonny wasn’t finished. He served as a mechanical tutor on a runanga training programme and, as a retirement job, took on a franchise called Kwik Kerb. For this, he enlisted daughters Kerry, Karyn and Cheryl to mix the concrete and break up the old surfaces, while he operated the machine laying the concrete kerb.

His last job was as owner-operator of a caravan business called Country Fries — fish and chips and burgers for flea market, country rugby or rural community trade. Again, whanau helped out.

Sonny and Desiree were married for 64 years. They were in the same high school class and when they went to the pictures at Te Karaka together, it was on their horses.

After they left school, Desiree worked in a Gisborne bookshop. On Friday nights, Sonny would pick her up from work and take her to Whatatutu on his Triumph motorbike, and they would stay with Desiree’s parents for the weekend.

They married in 1954, when both were 20, and their first home was a one-bedroom-and-kitchen bach on family land at Puha. Eldest child Wayne was born the following year then, after a short time at another place in Puha, they were able to capitalise on the family benefit for the two children they had by then, and build in Te Karaka.

After Sonny finished managing the Tolaga Bay Inn, he and Desiree moved into town, but not for long. About 30 years ago they moved to Patutahi. Shearers’ quarters from Mangatu were shifted on to a section behind the house belonging to daughter Cheryl and her husband Pareiha Te Rito. Sonny renovated and extended it until he was satisfied.

When his rugby days were over, Sonny enjoyed golf and bowls. He was a life member of Patutahi Golf Club and served as club captain. He hit a hole-in-one in a Tarere Marae fundraising tournament on the Waikohu course. Herald golf reporter Chris Taewa says Sonny “won his share of trophies”.

Sonny never read music but could play the piano, guitar and saxophone by ear, a skill that others in the family also have.

In the days when New Zealand male society was characterised by rugby, racing and beer, Sonny enjoyed all three.

“He liked a beer, and he liked a bet, on sport as well as racing,” Willie said.

“He would always bet against the All Blacks . . . better odds, he said. And when they were playing he would walk into the pub wearing a French jersey that Wayne had given him.

“He played cards with his children — for money and lollies — and if he was losing he would change the game.”

Sonny made an early impression on those he met, Willie said.

“A lifetime of hard work gave him a handshake that was like a vice.”

Sonny followed the achievements of his children, grandchildren and great-grandchildren. Among those with sporting accomplishments, grandson Campbell Te Rito represented Poverty Bay at rugby. Of the great-grandchildren, Conan Houkamau made the New Zealand secondary schoolboys’ rugby team, Kaea Hongara was selected to attend a Chiefs under-18 development camp last year and represented Waikato u19s this year, Keanu Wainohu-Kemp has excelled in waka ama paddling and has just taken up a contract with North Queensland Cowboys to play for their junior rugby league team, and Keanu’s sister Gaibreill Wainohu has been nominated in the Halberg Awards Emerging Talent category for her waka ama prowess, having been named Junior Maori Sportswoman of the Year for 2018.

This week the family continued a tradition of playing a round of golf on Boxing Day in memory of loved ones. It was the first time Sonny had not played.