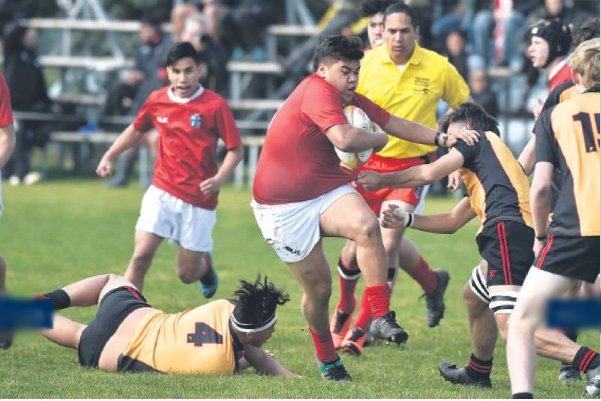 What a sensational start to the season.

The Poverty Bay under-16s came from 14 points down, scored three second-half tries — and were awarded a penalty try — to win a thriller against Thames Valley 34-21.

Thames Valley right wing Tyler Hallam-Doole and blindside flanker Dalton Broughton scored the first two tries of the game, both of which were converted by halfback Jack Newbold for 14-0.

Poverty Bay co-captain and openside flanker Amos Roddick then scored — the conversion attempt missed — and Gemmell scored again soon after. With reserve second five-eighth Tuteari Te Rauna-Lamont’s conversion, Poverty Bay closed it to 21-19. Soon after, Te Rauna-Lamont kicked a penalty goal to give the Bay the lead, 22-21, for the first time in the game.

Referee Adam Tapsell then had no choice but to award a penalty try to Poverty Bay — the ball-carrier was taken clumsily in the act of scoring. No yellow card was given, nor was there any reason to issue one. With penalty tries now constituting an automatic seven-point award, Poverty Bay were up 29-21.

Lock Tuhoe Kake won the player-of-the-day award for the Valley and was superb in defence. In one passage of play, he made four consecutive tackles. Thames Valley captain and openside flanker Matt Charlton also played strongly.

“We kept our structure, were good at scrum-time and found space, especially on counter-attack,” said Valley coach Don Edgecombe, who nominated the Bay’s co-captains as their best with the ball in hand on the day.

“Poverty Bay dominated possession in the second half and showed loads of character to show up on defence — they hung in there and then they came back.”

Both the Poverty Bay u16s (against Wairarapa-Bush) and u18s (against Horowhenua Kapiti) are in action again at 1pm on Saturday, at Tremain Field in Napier.

It will be the u16s’ last pre-season game before the 1pm clash with Hawke’s Bay at Lambton Square in Wairoa the following Saturday, and will be the u18s’ second Hurricanes Youth Rugby Council tournament fixture after the 34-20 loss to Wellington Community in Gisborne at the weekend.