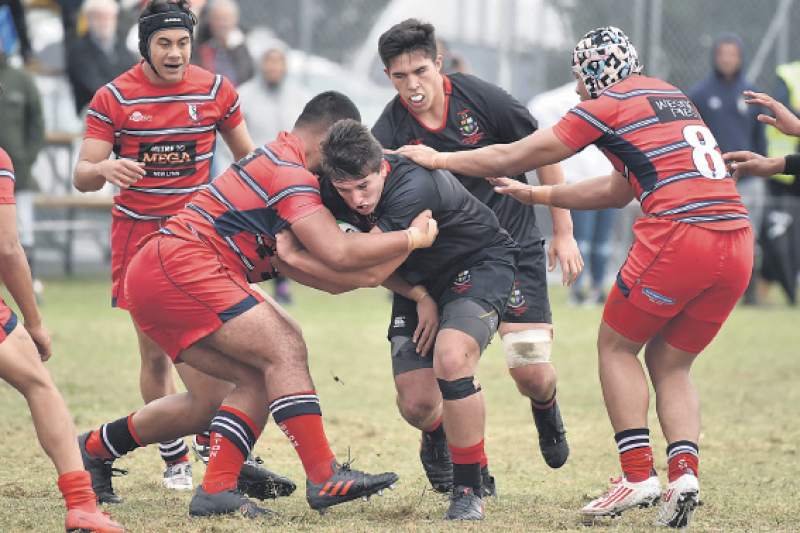 Gisborne Boys’ High School’s match-effort here on Saturday was courageous. They did all but win a fast-paced, high-energy clash with Kelston Boys’ High, who took the laurels 29-23.

“We’re disappointed to lose because while we lacked intensity and rhythm on attack in the first half, we fought back,” Gisborne head coach Mark Jefferson said.

“We’re working on everything and just trying to get better every game. While we know nothing about St Edmund’s, tonight will give us a good chance to get more game-time and establish combinations.”

GBHS have springheels in the form of lock Ofa Tauatavalu, but the lineout is an area that Gisborne Boys’ High will doubtless work hard to improve in.

Right-wing Matt Proffit made an excellent tackle seconds into the game and halfback Quintony Ngatai made a try-saving tackle on Kelston right-wing Soane Mapa 20 minutes later, with Wyllie, Collard and Hall all to the fore defensively in the second half.

“We know we let this game slip and the boys are determined not to let that happen again,” Hall said.

“Kelston are a quick team, physical and they love to run: you have to be good at the breakdown and shut them down early.

“That said, we didn’t give up. We kept chipping away at their lead in the second half. We pulled them back but then let it slip in the last minute.”

Fretton scored the last try 20 seconds from fulltime, the ball finally rebounding to him off an inside pass down the left sideline.

“We scored in the first minute, led 15-8 at halftime but the game could have gone either way,” said first-year head coach John Senio, assistant coach in 2017.

“That was a great contest.”

McFarlane’s try in the 33rd minute spoke to this team’s stickability and persistence.

The ball went through three sets of hands on its way to the big No.8, and he finished well in the left corner.

The quality of Collard’s kicking in general play was very good. Going forward, he has the vision and skill-set to put future opponents under pressure, while the likes of Proffit and fullback Moses Christie will be keen to get the ball in their hands this evening.