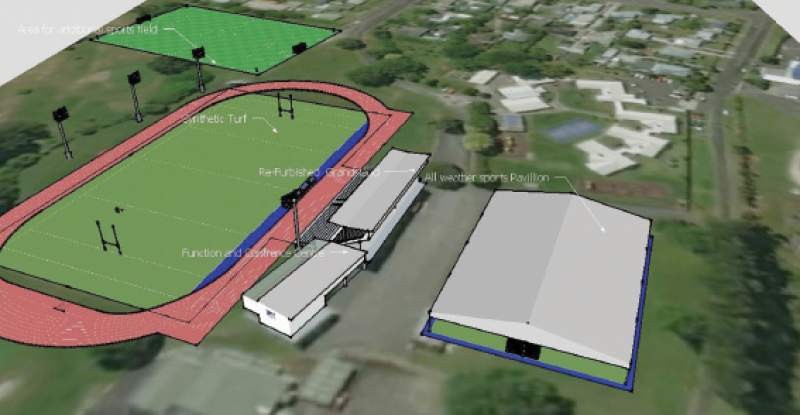 POVERTY Bay rugby aims to install an artificial playing surface in a new sporting hub based at Rugby Park, which would also feature an athletics track, all-weather training area, an additional grass turf and a conference centre.

The union has held discussions “within rugby circles” to determine what is required to bring higher-level games to Gisborne.

Mr Davis said the facility would include improved seating and access for people of all abilities, modern changing facilities providing for female players and referees, improved public ablutions, and office space for the rugby union and sporting partners.

The union supported the community facilities principle of hubbing in general.

The proposed Rugby Park hub could cater for nearly all rugby training and competitions and meet the requirements of other sports and the community.

A recent example of the multi-use of Rugby Park had been the national primary schools kapa haka competition.

Interest had been gauged with league, touch, athletics and soccer independently of the council process.

“This indicates both vision and drive as well as a clear desire to provide an inclusive and collaborative approach crucial to the success of sports hubs,” Mr Davis said.

Mr Davis referred to the example of Wairarapa Bush’s facility, the only such facility operating in New Zealand. Rugby and soccer shared training times and played at the Masterton facility.

Low-grade feasibility studies had been undertaken regarding Rugby Park’s 1965 vintage grandstand, which required maintenance and a new roof.

An initial seismic test had been conducted but terrain testing for an artificial pitch and synthetic athletics track had been delayed by the community facilities strategy process.

Local funders had contributed funds for feasibility studies, which “indicated support for the vision to develop and expand Rugby Park”.

The development could be stage-managed as required, with project supervision provided by Gisborne District Council, supported ably by union staff and members.

The rugby union and partners would seek support from funding entities and approach Gisborne District Council regarding turf renewal.

A full feasibility study and a business model (including accurate project costs and revenue streams) would be completed.

An eighth premier team (believed to be Tapuae) would play in 2018 and there would possibly be seven teams in senior division 1.

The union needed to provide facilities to address population growth and an anticipated increase in participation, particularly among females.

The board would shortly release its strategic plan, which would address such issues.

Rugby Park, Barry Park, The Oval, and Waikirikiri Park were used by 2100 athletes and all grounds were unavailable on at least four occasions last season due to wet weather.

It was intended that primary school rugby would continue to be played at Waikirikiri Park.

The Oval would be used for training by the clubs based there.

At least two rugby games would be played at the new-look Rugby Park, with clubs currently training at Barry Park training on the turf.

Accommodating other codes would dictate training and match schedules.

Barry Park could be released back to Gisborne District Council.

Rugby Park could be re-established as the “premier sporting facility” in the region and could be shared with East Coast during the Heartland Championship.

Questioned by Councillor Malcolm MacLean, a former Poverty Bay Rugby Football Union chairman, Mr Davis said that subject to funding of the facility, he expected no detrimental impact on player and club subscriptions.