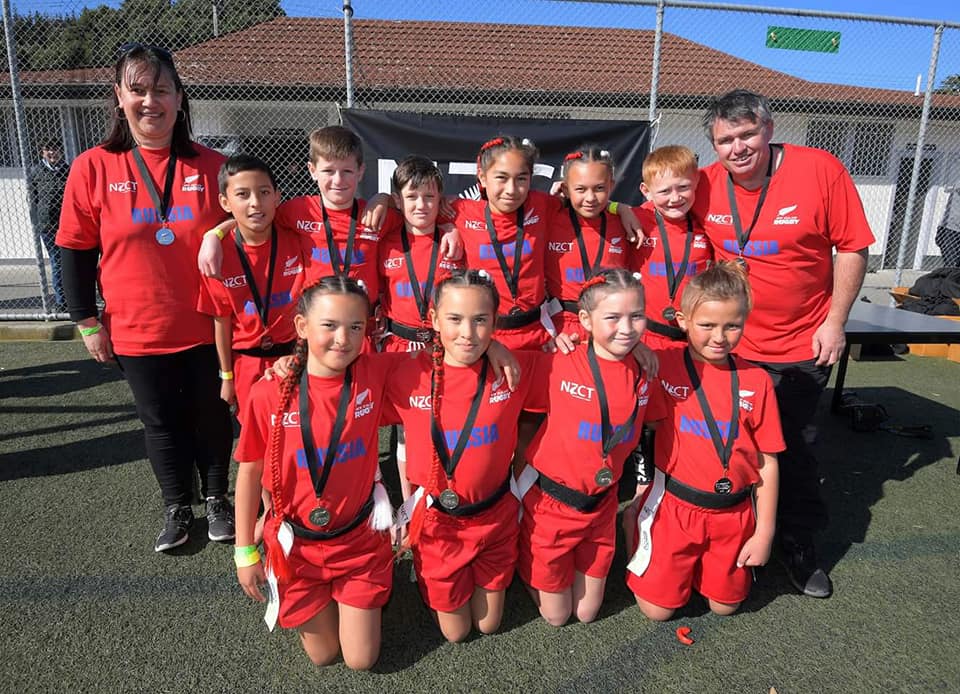 By The Gisborne Herald’s Grant Miller

Mangapapa School rippa rugby players were welcomed home as heroes last night after their runners-up performance in a national tournament in Wellington and their reward includes special time tomorrow with some All Blacks.

The Gisborne school were unbeaten until they came up against the might of Auckland’s Western Heights, who won the final 6-3.

If they’re still on a high after their efforts in Wellington, the Mangapapa rippa rugby stars won’t be brought back down to Earth tomorrow, because a group of All Blacks will arrive in the city.

New Zealand’s 31-man Rugby World Cup squad is being named in Auckland today and then players will be sent in groups to various centres — including Gisborne — to meet fans.

Five or six All Blacks are expected to fly in from Wellington ahead of a public event at Rugby Park, from midday.

More than 300 school children will be bused in from rural areas and the All Blacks will take part in a Q and A session and sign autographs.

Mangapapa pupils will have special moments of their own. Rippa team captains Jerome Tamatea and Hine Brooking will be at the airport to welcome the players.

However, the airport is encouraging the public to go to the event at Rugby Park, rather than the airport, because of building activity at the airport.

“With the new airport terminal under construction, space is very limited,” a Gisborne Airport spokesperson said.

“We encourage everyone to visit Rugby Park to welcome the All Blacks to town.”

Poverty Bay Rugby Football Union chief executive Josh Willoughby said all Gisborne schools had received an invitation to see the players and buses had been arranged for rural schools.

Eastland Community Trust chief executive Gavin Murphy said the trust was pleased to pitch in to help make that happen.

“From Tiniroto to Hicks Bay, we are covering the cost of vans and buses, for more than 300 students.

Mangapapa, representing Poverty Bay, won that game — and the Gold Rugger Cup — then went on a winning run over two days of competition.

They won their first five games, drew their sixth and were top of their pool. Western Heights were too good in the final.

“Our kids played out of their skins,” Donnelly said.

“The competition was fierce and there was an amazing atmosphere. The children were great ambassadors.

“To make it to the final was huge.”

The teams were allotted the names of countries, World Cup-style.

Mangapapa were Russia, Te Waiu were New Zealand and Western Heights were Fiji.