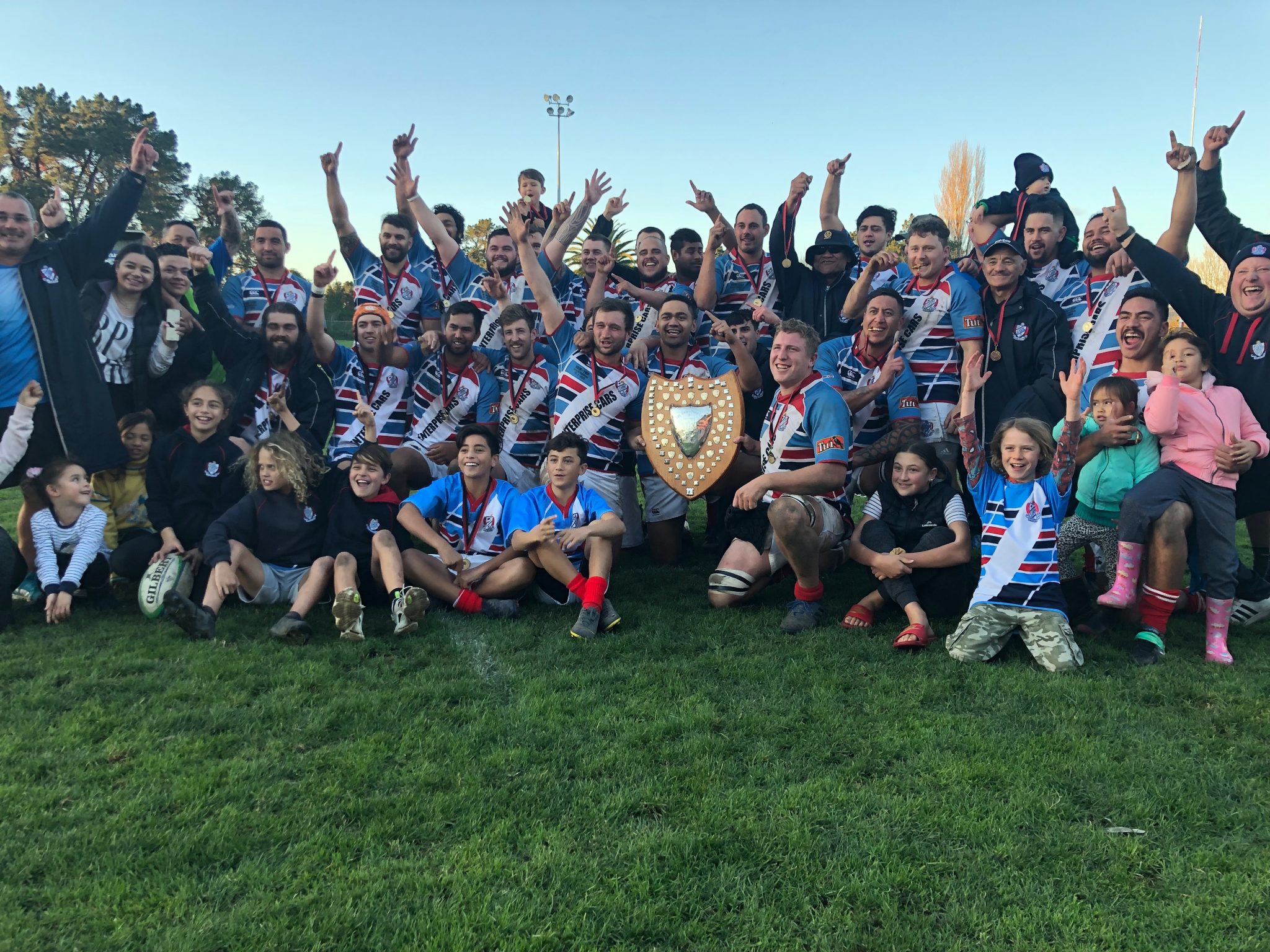 Story courtesy of The Gisborne Herald

The first songs that greeted OBM’s players in their clubrooms were We Are the Champions and (Simply) the Best, and after a 65-5 rout of their opponents, no one could argue with that.

Enterprise Cars OBM lifted the Lee Bros Shield for the first time since 2004 when they defeated YMP in the Poverty Bay club rugby premier-grade final at Rugby Park on Saturday.

It was almost certainly a record score-line in a final.

Scoring 11 tries to one was one indicator that they claimed the title in style.

A strong set piece, lovely use of space, gorgeous handling and a hat-trick of tries for left wing Keelan Poi were others.

OBM had been building all season but saved their best performance for last.

It was like a dream for OBM coach Trevor Crosby.

“We stuck to our structures. No one played badly.

“I’m a real proud coach at the moment.”

YMP coach Steve Smith had seen his team win a thrilling semifinal in extra time against 2018 champions Waikohu the previous week but the final was a tough watch.

“The boys are upset; they never gave up,” he said.

Smith said Crosby had done an outstanding job with OBM and they were a well-conditioned squad.

“They played the style we want to play. They deserved that win.”

Exceptional OBM openside flanker Adrian Wyrill scored the first try inside 10 minutes, just as he had two weeks earlier when OBM cruised to a 49-10 victory over YMP.

Centre John Jones kicked the conversion from the sideline.

YMP responded with an unconverted try to prop Axel Campbell.

“After that, we nullified what they wanted to do.”

After 22 minutes, OBM hooker Rikki Terekia burst through the middle to score a try.

Poi was in for a try three minutes later.

Jake Holmes was having a field day for OBM at first five-eighth, showing composure and setting the backline alight.

YMP needed to score next but OBM absorbed their pressure and Poi scored his second try just before halftime.

Poi said OBM’s forwards were strong and he was well served by the backs inside him.

“Our inside backs were outstanding.”

Down 24-5 at halftime, YMP looked shaky.

The contest was effectively over a minute after the break, when lock Juston Allen dived in for a try.

Grogan said afterwards that players had moaned about the fitness work they put in, “but look where it got us”.

Co-captain and lock Jacob Cook said YMP were physical at the breakdown.

He urged his players to keep driving forward in the second half.

Crosby suggested that, more than just a team effort, the title win was a club effort.

The players’ families were supportive, past players were brought in as mentors, his own family allowed him to get involved, his brother Tom Crosby worked behind the scenes and the club had people “who want to help”.

Smith said YMP would be back — the club had a proud history and it would be 110 years old next year.

YMP stalwarts Reihana Wyllie and Willis Tamatea announced before the game that they would be wearing the club’s colours on the park for the final time.

Wyllie, a second five-eighth who loved to take the ball into contact, said he was handed his first YMP jersey 21 years ago.

He said he was glad to retire while his body was still in good nick.

Wyllie was “blown away” by OBM’s performance on the final.

YMP had a rollercoaster ride this season — starting well, then getting the speed wobbles before making the final — and an off-field incident in May resulted in five players copping suspensions.

“It was probably our toughest year as a club, on and off the field,” Wyllie said.

The club had always been close to his heart.

He also played for Poverty Bay in the Queen’s Birthday fixture against Ngati Porou East Coast this year.

Tamatea, a lock or loose forward, started his journey with YMP in 2002, playing under-21s and then in the premier grade.

At the trophy presentation, High School Old Boys lock Fletcher Scammell was named the club season’s most valuable player, ahead of Pirates-GMC loose forward Will Bolingford and Waikohu back Ethine Reeves.

Scammell, a former OBM player, said he was happy to get more game time this year.

He felt that the club competition was stronger this season.