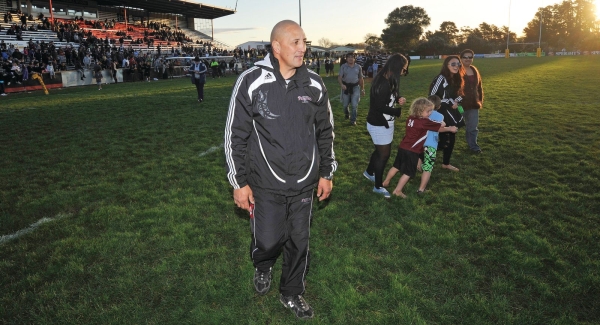 The best gauge of a man’s significance is the value he adds to others’ quality of life and the esteem in which he is held by his family, his peers and even his opposition.

Glover, now president of the Poverty Bay Rugby Football Union, said: “Henry loved the game and was highly respected — a natural leader of men. I admired him as a player and as a person.”

Former NZ Maori Rugby Board member and ex-Poverty Bay deputy chairman Albie Gibson counted himself — while at Lytton High School — as an on-field “arch-enemy” of Maxwell’s. Later they were Gisborne Maori Club (GMC) teammates at u21 level and in the premier side.

“He was a dear friend and he had many friends in the rugby fraternity: I’ll miss him,” he said.

“He never asked others to do anything he wouldn’t do. Henry was fit, well-prepared and aggressive with amazing ball-skills and footspeed for a big man. He wrought havoc from the ‘Willie away’ at lineout time. As a No.8, I could hear opposition No.10s screaming as he came towards them.”

Maxwell debuted at first-class level for Poverty Bay in a 29-9 loss to Bay of Plenty at Gisborne on July 5, 1980. He played for Poverty Bay against the Springboks in the opening match (24-6 to South Africa) of their tour here in 1981.

Maxwell relocated to South Auckland in 1982, playing first for Weymouth, then Manurewa and — between 1982 and 1993, on 107 occasions — Counties-Manukau.

Rod Ketels, All Black No.802, was Counties’ loosehead prop of choice and Maxwell was often the anchor of the scrum during the latter’s first five years with the union.

“Henry came into a successful Counties set-up; he mixed and mingled well with the people up here,” Ketels said.

“We were very strong up front in those days and produced teams that could beat anyone. Henry was a good player — a good prop, scrummager — and he dealt with matters on the field.”

Henry Maxwell will be remembered for far more than merely what he achieved in rugby, though he played 135 first-class games including two for New Zealand Maori, 107 for Counties and 13 for Poverty Bay. His last first-class game was for the NZ Divisional XV, a 35-26 win against the Western Samoan President’s XV at Apia Park, Apia, on November 3, 1993. On October 9 that year, he had played in Counties’ 38-10 win against Bay of Plenty at Rotorua to earn promotion from the second division back up to the first division of the National Provincial Championship.

Andrew Talaimanu and Henry Maxwell were player-coaches at Manurewa from 1990 to 1994 and coached Counties in 2000-01.

“He’d battled health issues for 15 years — his resilience, is a testament to him,” Talaimanu said.

“Up here, the man was a fencer, a builder and laid concrete for a living. He was always one to pick up the shovel and work hard, he wasn’t there for the limelight. Henry was one of the best guys ever to play the game — he was my brother.”

Pirates chairman Pat Makiri worked closely with Maxwell, who coached High School Old Boys before linking with the Buccaneers in 2007. Under him, they made the club premier grand final in 2010 — their first in 58 years — against Young Maori Party (YMP), a 23-22 loss. One year later on the same stage, Pirates beat YMP 19-8 to claim the Lee Brothers Shield. Pirates under Maxwell were champions again in 2012 and 2014.

“Henry was a humble man and committed to Pirates,” Makiri said.

“He attracted many top players to us at a difficult time and took us from mud to glory.

“We as a club are very saddened by his loss but are grateful, too, that he shared his professionalism and leadership skills with us. He’s a legend and will never be forgotten.”

Poverty Bay centurion and a grand final-winning captain and coach with Enterprise Cars OBM, Trevor Crosby, spoke in the same vein, reflecting the sentiments of club coaches and players.

“You could talk to him about anything, not just rugby — he was calm, collected, astute and always willing to help,” Crosby said.

“He was approachable, people were attracted to him. Henry didn’t need to yell as a coach, he spoke calmly, gave people space and the opportunity to express themselves.”

Haley Maxwell has wonderful memories of a devoted father, who at Christmas wore red as Hana Koko (the Maori equivalent of Santa Claus) for his grandchildren.

“Dad was a huge family man and we knew what was most important to him: his values of honesty, loyalty, looking after people,” she said.

“He became very passionate about Te Reo Maori me nga Tikanga (Maori language and customs), and in the last six years he was one of a group of about 30 — Te Pae Kahuriruhi — led by Morehu Nikora, the purpose of which was to grow our own knowledge of tikanga through whaikorero (the art of speaking on the marae).

He was a man of dignity — but also wit — who was articulate and could hold a crowd.”

Henry Maxwell did a great many things for many others and did great things in his life. His integrity, decency, kindness and humanity are abbreviated here, but are cherished by many here and elsewhere. He made a contribution of inestimable value to many lives in his 59 years.

— Obituary by Ben O’Brien-Leaf, Reporter at The Gisborne Herald