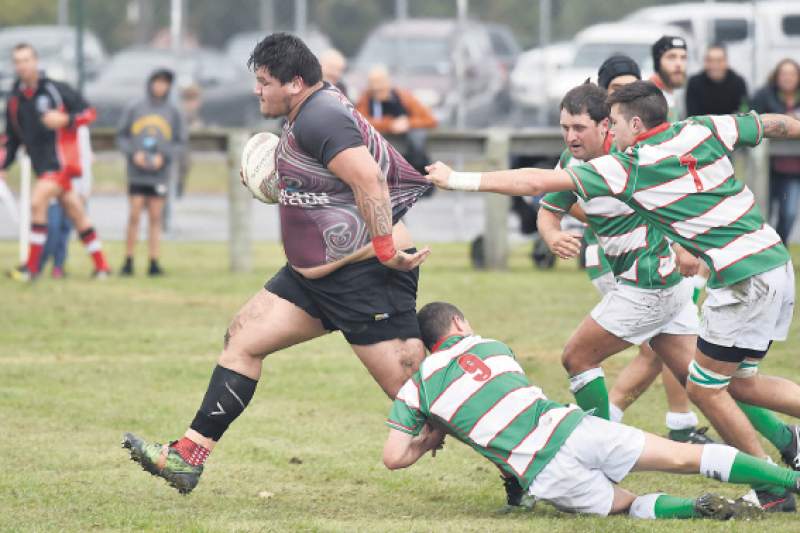 Courage, class and speed — that was Waikohu in their 34-10 win against Ngatapa in a premier rugby match at Patutahi on Saturday. And those qualities applied to no one more than second five-eighth and stand-in captain Ethine Reeves.

He had to settle for two points, one behind GT Shearing Waikohu lock Richard Green, for the player-of-the-day award. But the mercurial Reeves was magnificent on defence, especially in the latter stages of the game as Ngatapa camped inside the Waikohu 22, forcing scrum after scrum five metres out.

Loosies Tulsa Kaua and James Rutene and No.8 Ken Houkamau, along with replacement flanker TK Tane repeatedly put their bodies on the line against a wave of green-and-white jerseys.

The class? Look no further than Reeves, who scored two scintillating tries, made another and kicked three conversions and a penalty. But it could also apply to fullback-cum-centre Stewart, who carved huge holes in the Ngatapa defence with his speed, and centre-cum-fullback Kelvin Smith.

Ngatapa, going for their third win in a row, rocked Waikohu when lock Richard Webby opened the scoring with a try in the fifth minute from their first attack of a game that was a credit to both teams.

Two minutes later it was 5-5 when starting right-winger Kirwan Ratapu finished off a move instigated by Smith.

“That’s the way to hit back,” a Waikohu supporter said.

From then on it was a game of attack, defence and counter-attack.

Former Ngatapa prop Jarryd Broughton, making his starting debut for Waikohu, then set up the second try with a rampaging run before Counsell took the offload and dotted down close to the posts. Reeves converted.

Reeves stretched the gap to 15-5 after 22 minutes with a penalty but back came Ngatapa, who forced three successive five-metre scrums with Waikohu at full stretch holding their line.

In the 33rd minute, Fleming led the charge that ended with Reeves scoring a try, which he converted to put Waikohu in the box seat.

However, two minutes later, Counsell was yellow-carded by referee Royce Maynard for kicking the ball away after Maynard awarded a penalty to Ngatapa.

Ngatapa made Waikohu pay with a try to Alex Chrisp on the stroke of halftime.

Urged on by their supporters, Ngatapa took up the challenge and put Waikohu under tremendous pressure in the second half.

They let themselves down by overdoing the pick-and-go. It took them close to the line but there were occasions when the ball out wide could have paid dividends.

The Waikohu backs were living on scraps but were always dangerous on the counter-attack. When Reeves again broke free he delivered a perfect kick for Smith to score a fine try, which Reeves converted.

With 23 minutes remaining, Ngatu brought on former Poverty Bay foward Martin Bayley, who showed his class with some great lineout takes and strong running. But when the next points came it was again that man Reeves who started and finished the move. He made a brilliant break from deep inside his half, then freed Smith who, when tackled, popped the ball up to Reeves to score.

“Individuals score tries and that’s great, but it was our courage on defence that won this match,” Waikohu coach Jason Tuapawa said.

“I was really proud of our defence but the good thing is I saw a lot of areas we still need to work on.”

Ngatu said the better team on the day won.

“We didn’t help ourselves by making too many mistakes and taking wrong options,” he said.

“We had a lot of possession, especially in the last 40, but that’s OK. It’s early days and we’ll learn from this loss.”